Prejudice in disguise: Which features determine the subtlety of ethnically prejudicial statements? 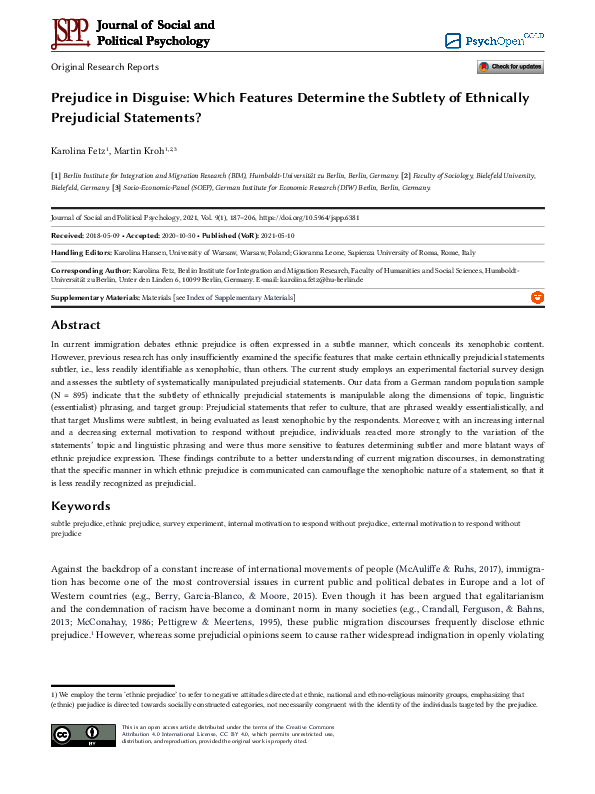 In current immigration debates ethnic prejudice is often expressed in a subtle manner, which conceals its xenophobic content. However, previous research has only insufficiently examined the specific features that make certain ethnically prejudicial statements subtler, i.e., less readily identifiable as xenophobic, than others. The current study employs an experimental factorial survey design and assesses the subtlety of systematically manipulated prejudicial statements. Our data from a German random population sample (N = 895) indicate that the subtlety of ethnically prejudicial statements is manipulable along the dimensions of topic, linguistic (essentialist) phrasing, and target group: Prejudicial statements that refer to culture, that are phrased weakly essentialistically, and that target Muslims were subtlest, in being evaluated as least xenophobic by the respondents. Moreover, with an increasing internal and a decreasing external motivation to respond without prejudice, individuals reacted more strongly to the variation of the statements’ topic and linguistic phrasing and were thus more sensitive to features determining subtler and more blatant ways of ethnic prejudice expression. These findings contribute to a better understanding of current migration discourses, in demonstrating that the specific manner in which ethnic prejudice is communicated can camouflage the xenophobic nature of a statement, so that it is less readily recognized as prejudicial.